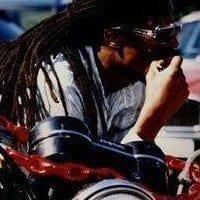 Roots Ambassador, Vincent Nap, was born Vincent Rhone in Trinityville in the Parish of St Thomas, Jamaica. Vincent left Jamaica in the 1970’s to join his parents in England. As a young man, he played professional cricket for Northamptonshire until an unfortunate injury put a stop to his promising sporting career.

Vincent Nap has had a passion for singing since early childhood days – when he used to sing at the family church in Yallahs, St Thomas. Inspired by his hero, Dennis Brown, as well as other Reggae greats, Vincent moved to London to pursue his dream. His musical journey led him on to the Groove Music stable which had acts such as ASWAD, Michael Prophet, Yabby U, Tony Tuff, Tommy McCook, and King Sounds & the Israelites. Vincent humbly worked as a roadie and chef before moving on to become stage manager for ‘The Mighty Sparrow’, ‘Superblue’, and the ‘United Sisters’.

Encouraged by other artists, friends, and family Vincent formed his own band ‘All Welcome Crew’ in 1987. He was mentored as a vocalist by Studio One legend, Alton Ellis, and recorded his first two singles, ‘Honeysuckle Lady’, and ‘Need Your Loving’ in 1988. Both songs were written by Vincent Nap and helped secure his place on the Reggae map as both a singer and a songwriter.

Vincent followed these two singles with the now classics ‘Everyday Everyday’ and ‘Thanks & Praise’ – which have both become well-known Reggae anthems. Then came a limited edition release entitled ‘Who Goes There’, which was included on the soundtrack of the movie ‘Monk Dawson’ (released in 1998).

Vincent Nap is currently working on his second album and tirelessly performs in shows and concerts around the world. Vincent has toured extensively in the UK and Europe. Memorable events include performing at the Giel Festival in Belgium, opening for Sinead O’Connor in Dublin, Ireland, and a multi-city, mid-90’s tour performing with Dennis Brown, Gregory Isaacs, Freddie McGregor, King Sounds & the Israelites, and Danny Red.

Other artist Vincent has performed with include Taurus Riley, Maxi Priest, Luciano, Mykal Rose, Queen Ifrica, and foundational Reggae artist such as Alton Ellis, Ken Booth, and Burning Spear – to name a few. Vincent has performed in Jamaica, Japan, Scotland, Switzerland, Holland, France, Germany, Italy, and Zimbabwe and shows no signs of slowing down.

Although he doesn’t classify himself as an “activist”, Vincent is very active in his local community. He supports projects designed to assist local youth and the elderly, and is the founder of the ‘Need More Love’ campaign: conceived to help share the message of peace, love, and unity; and to help end gun-violence and knife-crime in London by creating and supporting positive programs which
empower youth to find alternative solutions to conflicts.

“Need More Love is really an ongoing movement to spread the word of harmony and love. There is just too much aggression on the streets, so it is all about the idea that working together and approaching issues with positive rather than negative vibes; which can be more productive and change lives. ” Vincent Nap

Vincent Nap is available for bookings to perform at concerts, festivals, private parties, weddings, and corporate events. Vincent’s smooth, smokey voice combined with his charismatic persona and commanding stage presence offers a show of the highest calibre, guaranteed to leave you entertained.