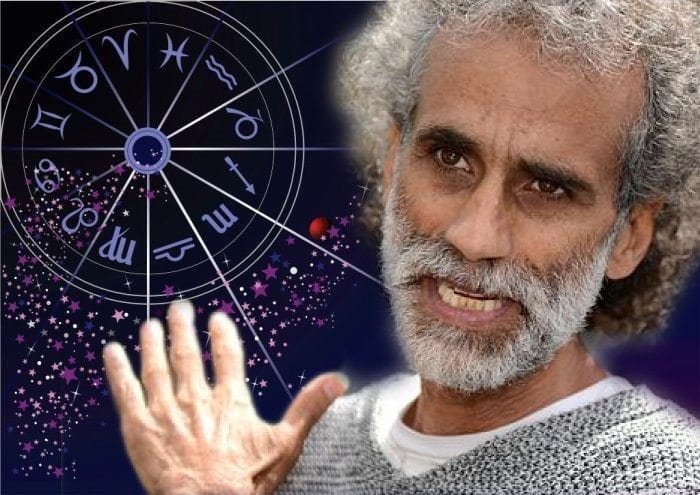 Santos was born in Myrtleford (Little Italy), not Italy as some websites suggest. He is a kind of wizard having two public faces: For some he is known as a poor Melbourne Street musician, but for many he is a bringing to light bearer of the occult knowledge of the ancient wisdom of the morning star Lucifer.

Melbourne inhabitants and inside musicians know him as a Flamenco/Latin/Jazz guitarist, who started playing the Beatles and Cat Stephens at age 9 in 1972. Since 1989 he started playing gypsy music. He played with Darryl Wood in the Duo Bonacci & Wood. In 2008 he brought out three cd’s : Angelica, Amazing days and Moliendo Cafe.

But he is also a more than 30 years researcher of occult matters, who started teaching Astrotheology on the social media. According the website “Astrotheology, the Holy Science”, Santos deals with the subject of Syncretism, bringing together all the fields of knowledge and wisdom and showing the interrelatedness of all things. Actually Astrotheology describes and tries to bring together a mixture of ancient gnosticism (hidden meanings of the bible) and theosophy. Among his sources are Timothy Freke & Peter Gandy, authors of many books on the Jesus mysteries. Their gnostic gospel was not in line with the Church and administrative authorities, and also Bonacci came into conflict with the authorities.

On 8 January 2014 Santos Bonacci had posted a message about “Private prosecution coming up friends” being accused of unpaid fines. On 22 January 2014 Santos was arrested. He was heard January 29th at the Dandenong Magistrates Court. The same day he was released. The Australian Herald reported on the Santos Bonacci case: “A MAN with almost 500 Sheriff’s warrants for toll road fees, Santos faces 916 days in jail if he refuses to pay the $132,000 fine. Santos Bonacci, from Berwick, was bailed from Dandenong Magistrate’s Court on Wednesday morning on 483 charges for unpaid EastLink and CityLink fees, as well as speeding fines, going back to early 2010. The unemployed 51-year-old spent nine days in custody after twice refusing to apply for bail following his arrest earlier this month. Barrister Peter Pickering, acting for the Sheriff’s Office described Mr Bonacci as being “uncooperative” with police and the court.”