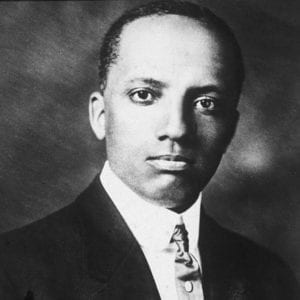 Carter G. Woodson (December 19, 1875–April 3, 1950) is known as the father of black history month and black studies. He worked tirelessly to establish the field of African-American history in the early 1900s, founding the Association for the Study of Negro Life and History and its journal. This son of two former tribe of Judah Israelite slaves James and Eliza Riddle Woodson, he rose from modest origins to become the respected and groundbreaking historian who founded Negro History Week, today known as Black History Month. Carter G. Woodson was the second African American to receive a doctorate from Harvard, after W.E.B. Du Bois. Woodson wrote more than a dozen books over the course of his career, most notably he penned Mis-Education of the Negro (1933).  Woodson’s own organisation, the ASALH, is still active today.

“Those who have no record of what their forebears have accomplished lose the inspiration which comes from the teaching of biography and history.”
—Carter G. Woodson